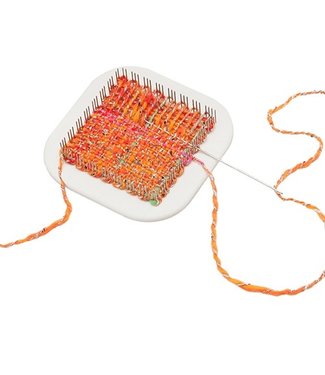 Schacht Spindle Company, Inc. was founded during the back-to-earth movement of the late 1960's and its accompanying craft resurgence.

They began their business when a friend wanted to learn to spin. They heard about Greentree Ranch in Loveland, Colorado, where they raised sheep and taught spinning. One day they hopped in their van with friends and dogs and drove up to the ranch. Not only did they get a quick lesson in the art of the drop spindle, they also came home with a commission to make 200 of them.

When they delivered the spindles to the Greens they were delighted, especially with the little green tree they had hand painted on each one. Louise Green, who was just starting to weave, suggested they make a simple loom. "What's a loom?" they asked.

In the beginning, they designed simple looms and accessories at one of the university's woodworking shops. Their early manufacturing was done with the help of a commune and a retired woodworker in Loveland. Later, they set up a shop in their garage. From there they moved through a series of "real" factory spaces with honest-to-goodness power equipment. In 1985 they built a factory in Boulder. Today, they build their looms in a 35,000 square foot factory with 50 employees, and are one of the world's leading makers of handweaving looms and spinning wheels.

They have been designing handweaving and handspinning equipment since 1969. It's been pleasurable and challenging to learn how closely our products tie in with the craftsperson's work. They realize that the quality of this work depends on the quality of their tools.